Taking Up Space: How Germany Can Work to Reduce Delivery Vehicle Traffic

Order something online one day, and you’ll receive it on your doorstep the next - at the very latest. In this day and age of total convenience, delivery drones and mobile pay options, fewer and fewer people are shopping at brick-and-mortar stores in favor of online ordering. Unfortunately, shipping all these packages around comes with its downsides: delivery vehicles are increasing traffic and congestion in German cities. 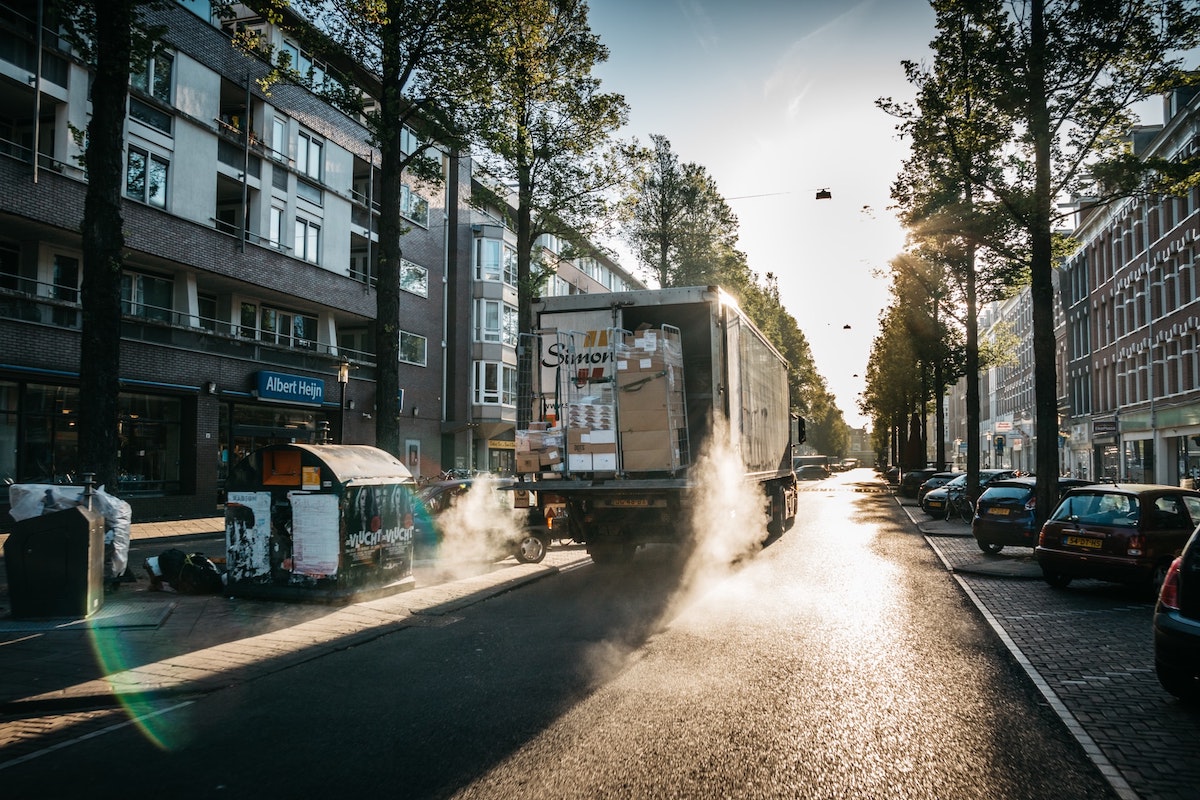 The current COVID-19 crisis is increasing the rate of delivery traffic tremendously. Delivery vehicles are driving around the clock to ensure that people asked to “shelter in place” still receive the necessary goods and products they need - but they also ensure the continued existence of many businesses who are otherwise fighting to survive. It’s unrealistic to assume that this uptick in delivery traffic will subside after the crisis is over. The comfort and convenience of shopping online is something people will remember even when the option becomes available to shop in-store again.

Delivery vehicles are clogging the streets of German cities

Although delivery traffic only constitutes one-fourth of city traffic, according to this study from consulting firm PWC, it makes up 80% of city center or true “downtown” traffic. That’s due in part to delivery vehicles parked on curbs, taking up valuable space, or oversized transport vehicles blocking smaller side streets. Bike lanes are also not safe from the occasional, recklessly parked delivery vehicle, which can be a dangerous predicament for cyclists to suddenly find themselves in. Needless to say, delivery vehicle traffic is a problem that needs addressing.

The incremental introduction of specific loading zones has only helped so much: the average time it takes to complete a delivery after exiting a delivery vehicle is roughly three minutes. The driver has to find the package in the truck or vehicle, scan it, find the address, deliver the package to your doorstep and then return to the vehicle. Every unnecessary step should be avoided to save precious time. Loading zones address the traffic issue, but not the extra time they cost individual delivery personnel, which is why they’re often not used.

Logistics issues affect all of us

Increased delivery traffic in German cities reflects a large increase in online shopping and exposes the weaknesses of a system running at max capacity and lacking political regulations and guidelines.

A high number of transport vehicles leads to an overload of city congestion, partially because those vehicles block the flow of traffic. That affects delivery drivers and end users alike, whether they’re individual people waiting on their packages, commuters stuck in gridlock on the way to work, delivery personnel working under pressure to deliver as fast as possible, or shipping companies forced to deliver an ever-increasing number of packages. Of course, that traffic isn’t just an inconvenience - it comes with a hefty increase in CO2 emissions and pollution, too.

In order to ensure that city traffic becomes more efficient and climate-neutral in the future, we need to consider the interests of all acting parties equally. That means we need to rethink the current state of urban delivery services entirely. Delivery services and the challenges they face are in desperate need of new regulations that take a company’s need to remain competitive into account. That’s the only way to figure out a solution that could effectively be put into practice.

But what would a successful concept look like? Ideally, it would take both logistical factors and the needs of city dwellers into account. Combining centrally located “microhubs” and cargo bicycles, for example, allows for nighttime delivery of packages to local city hubs, which then have much shorter distances to travel during the day due to their close proximity to downtown. The “last mile” that packages have to travel can easily be completed by e-cargo bike, clearing up space in cities that would have otherwise been occupied by large delivery trucks or other vehicles.

There are also many discussions about combining microhubs with the use of drones for the last mile, or even converting public transport into delivery vehicle replacements. A subway can be used to deliver large packages to a hub at night, for example, when passenger levels are low.

But there are two major problems with the microhub idea: one, many urban areas simply don’t have enough space for them. Two, no one is quite sure who should be responsible for these microhubs - should the city build new ones and ask shipping companies to pay rent to them for the space they’re using? Which delivery company should get the most space within the microhub? How can we ensure that space is split fairly amongst everyone?

Of course, since delivery companies can’t cooperate too closely with one another due to competitive reasons, we still need a neutral, most likely public institution to coordinate space distribution in microhubs.

The power lies with cities

The goal remains the same with every initiative: the reduction of city traffic and pollution caused by delivery vehicles. The number of delivery vehicles on the streets should be reduced to an absolute minimum, and the needs of the delivery personnel should be taken more into account. Now it’s up to cities and communities to try and achieve that goal by updating city regulations accordingly.

Cities should create a demand-oriented model together with logistics companies, but they should also make sure to define the rules clearly - and enforce them as necessary, of course. Until now, cities could fall back on staple delivery regulations like no-parking zones, delivery zones and exception permits. In the future, they’ll need to come up with more innovative solutions: that’s how we can encourage department stores and other large retailers to rent out their unused space to microhubs, for example, or allow for the use of cargo bikes in bicycle lanes, something which is still forbidden in many places.

Other European cities are also constantly searching for efficient urban transport solutions, whether that means more stakeholder engagement or simply more restrictions. The city of Gothenburg in Sweden has a network of industrial stakeholders who work together and exchange ideas and solutions for reducing delivery traffic. City officials, transport drivers, property owners and retailers all have a proverbial seat at the table. This concept was encouraged by the public sector and allows for the quick implementation of new ideas.

In San Sebastian, Spain, additional steps have been taken towards optimizing the city’s delivery traffic. Curbside deliveries are regulated to a specific time slot, and delivering outside of the allotted time can result in fees. This reduces congestion in the streets and also provides flexibility to companies that otherwise wouldn’t have the opportunity to park so close to the curb, such as large trucks.

If we hope to reduce traffic and increase efficiency in German cities, a unifying concept is of paramount importance - a concept that creates incentives, but also imposes necessary restrictions. That way, both the daily lives of city dwellers and the economic interests of delivery services are taken into account.