Part 1: The Future as Seen Through the Eyes of a Fairgoer in 1939

In 1939, the American public caught a glimpse of what their futures might hold at an attraction at the New York World’s Fair. Intriguingly titled Futurama and sponsored by General Motors, the installation was part-amusement park ride, part-exhibition and was so popular, fairgoers lined up for hours in sweltering August heat just to take part in the 25-minute long experience. 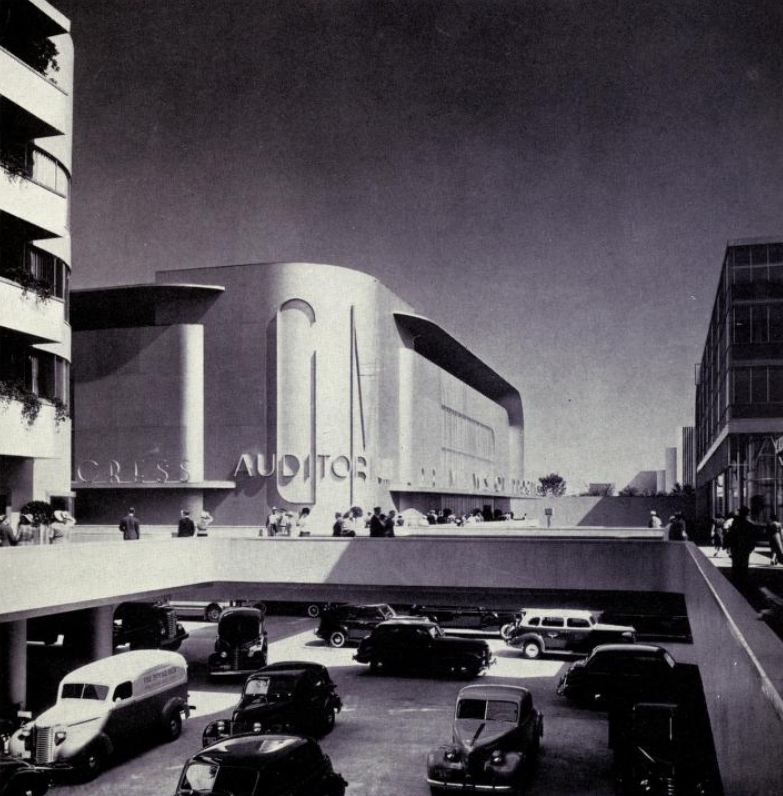 A model of a future city from the Futurama exhibit, 1939

It was an impressive exhibit: as they glided over a bird’s eye view of the “world of tomorrow”, which was set in the then-futuristic-sounding year of 1960, guests could gaze in wonder at a glorious new expressway system that would supposedly connect an entire nation from coast to coast, something completely unimaginable to most people alive in 1939. These expressways were “lighted by continuous tubing in highway safety curbing” and were places where “traffic moves at unreduced rates of speed” and a “safe distance between cars is maintained by automatic radio control.” The keynote of the motorway, as was literally said during the ride, was safety and increased speed. (1)

Futurama tickled the fancy of a generation of Americans who were still recovering from the Great Depression and were eager to hear good news about their immediate future. Since the exhibition was General Motors’ pet project, it predictably focused primarily on cars and “motor expressways”, both the absolute pinnacle of technological innovation in 1939.

Here we are, almost exactly 80 years later - or 60 years after GM’s vision of the future was supposed to come to fruition - and our highways are unfortunately not evenly lit by continuous tubing, nor are all sidewalks in cities suspended above extra-wide lanes of cars below, as was also hinted at hopefully in Futurama. However, the strides that have been made in infrastructure, mobility and transport are so great, they would almost assuredly cause the mind of a scientist alive in 1939 to boggle.

The idea of self-driving cars is actually quite old.

Modern people can look back on the predictions made in Futurama and scoff at things like seven-lane highways that only go in one direction for miles and miles, entirely impractical for drivers who realize (too late!) they’re on the wrong highway. But one sentence might have caught your attention due to its parallels to a certain type of modern technology: “safe distance between cars is maintained by automatic radio control.” 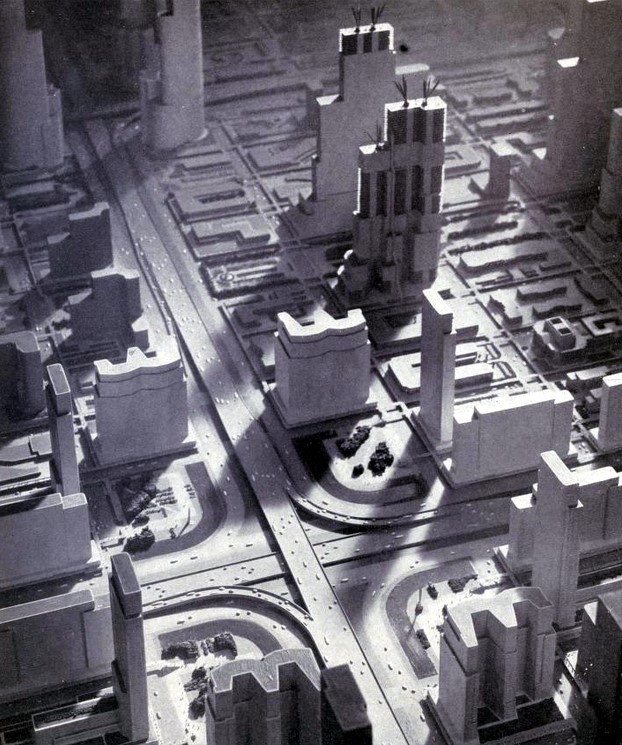 A bird’s eye view of the city of the future, from the Futurama exhibit, 1939

In fact, the exhibition included examples of radio-controlled cars that were propelled forward with magnets. (2) If it surprises you that even in 1939, people were already imagining the possibility of even semi-automated driving, it shouldn’t: the idea of self-driving cars is actually quite old, just like the idea that autonomous vehicles are safer than those driven by humans.

Even in the 1920s, the first “autonomous” car - which was an awkwardly shaped, remote-controlled box on wheels - was essentially created in reaction to an uptick in car accidents and touted as a safer alternative to real live human drivers. (3) It’s a curious thought: humankind has developed such a close relationship with machines, we trust them more than other human beings with our lives. Of course, that trust can only go so far.

The most famous accident involving an autonomous car happened in Tempe, Arizona, when a woman by the name of Elaine Herzberg was hit by a self-driving car being tested by Uber. The vehicle happened to have a backup “safety” driver sitting in the driver’s seat who reacted too slowly, and Elaine crossed the street illegally, meaning not at a designated crosswalk.

Autonomous vehicles will always be more alert drivers and have a faster reaction time than humans.

Since the incident involved two humans making mistakes - the driver behind the wheel who wasn’t paying attention, the woman crossing the street who fatally misjudged her timing - it ended up proving the point (albeit in a slightly convoluted way) that self-driving vehicles are safe: it’s human beings who are dangerous. To further exemplify that, Uber released an in-depth safety report in 2018 that highlighted their commitment to a brighter, safer, autonomous future. (4) 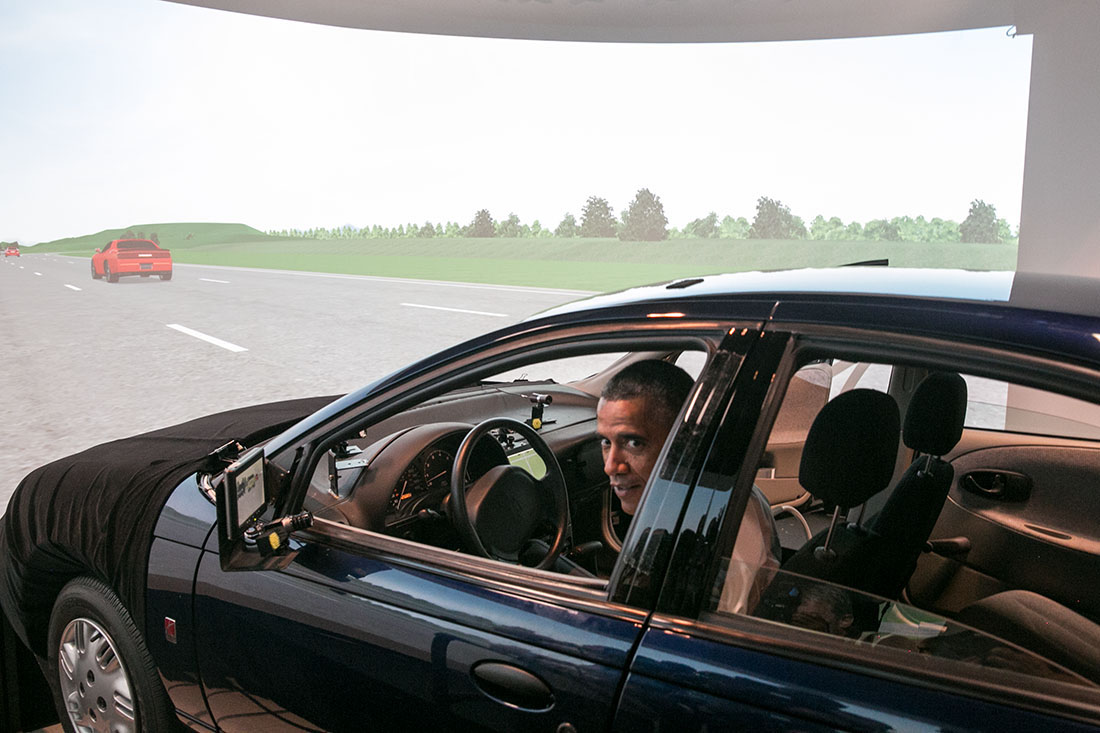 A former president in a driving simulator.

We’re excited about self-driving cars, but we need to realistically think about where they’ll be driving in the future and for what purposes. If we consider autonomous vehicles’ inability to fit in with human driving culture, coupled with their still-sensitive sensors that only work well in dry environments, and even the very necessary use of geofencing to create zones that autonomous cars can safely drive in without getting “off track”, the idea of self-driving cars almost entirely replacing non-autonomous vehicles still seems quite far off. (5)

Part 4: With Liberty and Autonomous Vehicles for All

General Motors’ self-driving vision of 1939 promoted good old-fashioned American values of private ownership and freedom (if you work hard and play your cards right, you, too, can buy your very own radio-controlled vehicle someday!), but the mantra today is very different. It seems that due to the relative inaccessibility of autonomous vehicles, they’re poised for sharing, rather than turning into something individual consumers would buy and park in their garage overnight. The tendency to move away from private ownership is generally seen as being a reflection of the broader shift in attitudes that is changing the mobility industry at large.

Shared autonomous vehicles are good news for our environment: experts predict that by 2030, 80% of people in cities will use autonomous shuttles and taxis (“robotaxis”) where available, and urban car ownership will fall by an incredible 70%. Even better, the total number of vehicles will drop by 50%. (6)

1960 has come and gone, and some of the inventions Futurama foretold, like an expressway connecting an entire nation, have existed for many years and even seem outdated in this brave new world of AI, information sharing and real-time data. Other visions, like a sea of self-driving taxis carrying four or more passengers and freeing up space on the congested freeways of Los Angeles or Manila, are still a little further off.

But we’re undeniably heading in the right direction. Autonomous vehicles hold so much promise and are right on the verge of going mainstream, so it’s hard not to feel as optimistic as fairgoers in 1939 must have felt when they were presented with an innovative, wonderful future right in front of their very eyes - so close, they could almost reach out and touch it. 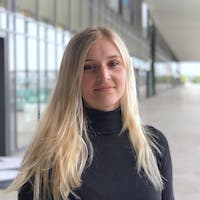 Find Out More About Wunder Mobility

We have a range of solutions using the latest technology driving forward the future of mobility around the world.